The influence of popular violent video games, such as the Call of Duty series, has penetrated into the global consciousness and culture as an example of the media psychology. Last year Call of Duty: Black Ops 2 grossed $1 billion dollars in sales within 15 days of its release and $500 million dollars in the first 24 hours (LeJacq, 2012). Averaging $60 per game, that’s more than 1.5 million copies sold in 15 days. Its predecessor, Call of Duty: Modern Warfare, sold 8.8 million units in the United States alone in its first month (LeJacq, 2012). Two recent examples seem to point to it becoming a cross-cultural phenomenon. The first example being of an Agence France-Presse (AFP) photo of a French soldier during combat operations sporting a facemask that resembles a character in the game known as “Ghost” to protect himself from dust. 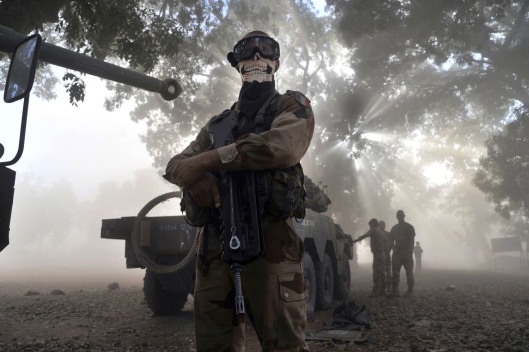 Fear and propaganda have always been psychological components of war, going back as far as the Greeks and Romans (Taylor, 2003). This inadvertent piece of propaganda reminds us, the public, that war is about death and dying at the hands of others, but further it’s a common part of today’s video games and considered “cool” by soldiers of various nationalities. Having “gone viral” on the internet, the French government is now trying to mitigate the damage by trying to identify the soldier in the picture for a reason as yet disclosed. A French spokesman, Colonel Thierry Burkhard, has labeled this as unacceptable behavior and that the “image is not representative of action by France in Mali” (Miller, 2013). War, no matter how “surgical” is about achieving an end by force while accepting that death is a normal part of an operation, collaterally or otherwise. Coverage of operations in Mali have been fairly sterile as the press was not initially allowed to accompany French or Mali soldiers in the combat zone for their own safety, but atrocities, such as lynchings, have been reported none the less (BBC, 2013). Control of who sees and reports on events, is psychological control over the audience and what they may think about (Lippmann, 1922).