4 Things you should know about augmented reality and 3D holograms.

Source: Augmented Reality is About to Change Everything.

For those of us – from aging baby boomers to generation Z – struggling with the question of how to move into the future and hold on to what we love about the past, this brief article offers some insight into the newest technology that will very soon impact all aspects of life.

The arrival of augmented reality (AR) seems inevitable ever since the launch of Google Glass in 2013. Since then, developers have been racing to deliver wearable devices with powers originally classified as science fiction.  These capabilities include augmenting reality with your own physical world, projecting high resolution 3D images, and manipulating those images with your hands.

1. What is Augmented Reality?

Augmented Reality (AR) is the integration of digital information with the user’s environment in real time.  Think Pokemon Go and Snapchap. In contrast, Virtual Reality (VR) – which has been around for some time  – creates a totally artificial environment. 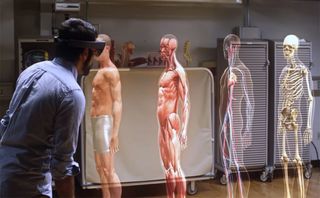 If this transformation seems impossibly fast, keep in mind that two of the top “revolutionary” ideas of TechCrunch 2006 were the BlackBerry Pearl and the iPod Shuffle – two devices that are have been mostly forgotten in less than a decade.   Computer scientists have a theory that predicts this change.  The idea, introduced in 1965, that computer power doubles every two years at the same cost is known as Moore’s Law.

According to Touchstone Research, AR is poised to swallow personal computing as we know it in the near future.  By their count, over 40 AR headset and glasses products are already on the market or in the advanced stages of development.  The race includes established companies like Microsoft, Google, and Apple, in addition to dozens of well-funded start-ups.  Estimates of the total market size of the AR business by 2025 range from $80 and $162 billion.  By comparison, the current global market size for television sets is roughly $80 billion.

AR promises to be a tool that provides a quantum leap in psychology education and clinical applications. Here are a few examples:

AR for the Deaf: HoloHear is a HoloLens application that translates speech into sign language.  When deaf people run the app, they see an avatar using sign language as well as subtitles.

AR for Autism:  AR systems are now being used to encourage autistic children toward more imaginative play.  Autism Speaks has funded a project to teach autistic teens about social skills in job interview settings and meetings with new people.

Other applications include an AR treatment for phantom limb pain, overlays for surgeries, and post-stroke hand rehabilitation.  The fact that the user can actually see his own hands and the real world can help in exposure therapies for several types of psychological problems, such as spider and cock-roach phobias.

We are only at the tip of the iceberg with this new technology.