Recently I was introduced to the first season of the A&E television show, Longmire, which is currently streaming on Netflix. I have only had the privilege of watching several episodes (I’m afraid my schedule just doesn’t allow for regular television viewing) and what I’ve seen so far is quite compelling. Alas- although the show is excellent, I’m not writing today to provide a program review but rather to revisit a segment I wrote and presented at the Western States Humanities Conference last year.

One of the more notable elements of the show is the immersive depiction of modern American Indians (the show is specific to the Cheyenne). This leads me to consider media’s influence portraying marginalized, indigenous communities. Interestingly, Marshall McLuhan, the visionary educator of communications, media, technology and humanity provided a powerful framework in which to analyze media. He wrote on media’s influence in constructing a “global village” and of the powerful process of “retribalization.” This post briefly defines McLuhan’s retribalization, while posing additional questions of the concept’s application.

Throughout history, indigenous peoples have adapted and adjusted to the disruption of their native ways by outside settlers and innovation in a process referred to as “detribalization.” McLuhan asserted that modern man suffered this fate, as well, in particular with the advent of the printing press. No longer relying on the communities for conveying news and cultural lore, the printed word allowed for solitary consumption of information (McLuhan & Fiore, 1967; McLuhan, 2012).

As electronic media filled the airwaves and dominated our living rooms, the relationships between man, information and each other have become intertwined. McLuhan stated, “The new electronic interdependence recreates the world in the image of a global village” (McLuhan & Fiore, 1967). It was through this global village that McLuhan identified the retribalization process, the reconnection of man in, “a new state of multitudinous tribal existences” (McLuhan, 1969, 2004).

Remarkably, McLuhan’s contention is nearly prophetic. Indeed, current technological advances, the World Wide Web specifically, have enhanced global communications in profound ways for individuals and communities. We now have the ability to be in touch with people from all over the world, instantly and constantly, if we choose.  This interpersonal process of global, ‘real time’ communication speaks to an instinctive and pervasive need for connection.

So what was happening for indigenous people during the dawning of the media age? According to McLuhan, detribalization was occurring (Norden, 1969, 2004). McLuhan asserted, in one interview, the following:

e Indian seem to always get a bad deal; they suffered first because they were tribal men in a mechanical world, and now as they try to detribalize and structure themselves within the values of the mechanical culture, they find the gulf between them and a suddenly retribalizing society widening rather than narrowing” (Norden, 1969, 2004).

It is an interesting paradox that as the majority culture seeks to retribalize through connective media, that tribal communities, once marked by their powerful connections, are relegated to oppressive detribalization. Or are they? 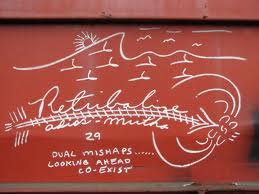 Many American Indians continue to be displaced from their native lands, receive substandard housing, education and employment and face other, challenging social costs of being an oppressed group. Where does media fit? Certainly, there’s the representation of American Indians in film and television. Regrettably, however, the Hollywood depictions of American Indians are often inaccurate, insulting and do nothing more than reinforce negative stereotypes (Diamond, 2009).

What about the World Wide Web? What form of retribalization is occurring or can occur through the Internet? Unfortunately, this information is currently limited, yet open for consideration. Since there are many reservations that have little to no Internet connectivity, it is difficult to assess the full influence of the Internet. Recent changes made by the Federal Communications Commission (FCC) prove hopeful for tribal communities, with regard to Internet connectivity. On Friday, November 18, 2011, the FCC released its “Connect America Fund” Order to foster Broadband deployment in underserved areas (Dunstan, 2011).

Other technological advances certainly emerge in Native communities. Chris Mercier (2011), an elder with the Confederated Tribes of Grand Ronde recently wrote about his experience at the National Congress of American Indians,

“What was the most pervasive symbol I saw at NCAI? Feathers? Dreamcatchers? Turtles? Try none of the aforementioned. The symbol that haunts my mind the most has little to do with Native American culture, the Apple apple. Everywhere I looked there were iPhones and iPads. Owners were using them frequently as well, which is how I know because the logo is very distinct.”

What would McLuhan make of this? How do the media advances and current technology affect our native communities, as well as the global village?

“The tribe, you see, is not conformist just because it’s inclusive; after all, there is far mor

e diversity and less conformity within a family group than there is within an urban conglomerate housing thousands of families. Uniformity and tranquility are not hallmarks of the global village; far more likely are conflict and discord as well as love and harmony — the customary life mode of any tribal people” (Norden, 1969, 2004).

As a media psychologist, “conflict and discord as well as love and harmony” are necessary provisions for continued observation, integration and understanding of technology. Through this process, one can seek McLuhan’s vision as well as synthesize the constantly evolving state of media effects on individuals, tribes and the global village. 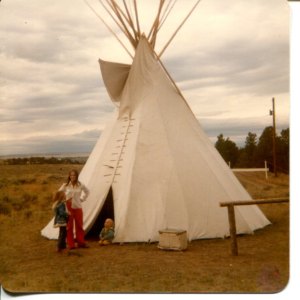 The author with her sister and mother, 1977

3 thoughts on “McLuhan and the Notion of Retribalization”