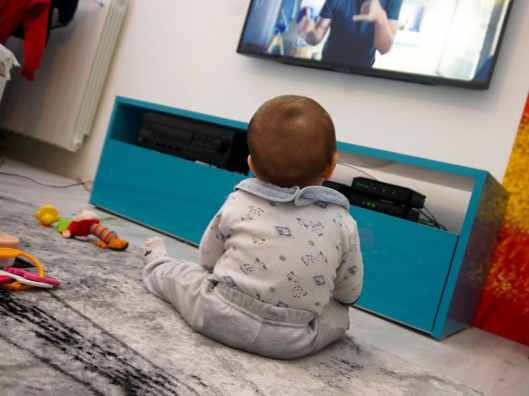 Source: Control of Screen Time Should Begin by Age 2

A Canadian study suggests that watching too much television can contribute to poor eating habits in adolescence and suboptimal school performance. While the concept is not new, the study suggests that screen time must be controlled by the early age of two, confirming new recommendations by the American Academy of Pediatrics.

Researchers at Université de Montréal’s School of Psychoeducation, performed a longitudinal study looking at a birth cohort of nearly 2,000 Quebec boys and girls born between spring 1997 and 1998. The children were followed since they were five months old as part of the Quebec Longitudinal Study of Child Development.

The research appears in the journal Preventive Medicine.

“Not much is known about how excessive screen exposure in early childhood relates to lifestyle choices in adolescence,” explains Professor Linda Pagani. Pagnai supervised the research of graduate student Isabelle Simonato.

“This birth cohort is ideal, because the children were born before smartphones and tablets, and before any pediatric viewing guidelines were publicized for parents to follow. They were raising their children with TV and seeing it as harmless. This makes our study very naturalistic, with no outside guidelines or interference — a huge advantage.”

Simonato added, “Watching TV is mentally and physically sedentary behavior because it does not require sustained effort. We hypothesized that when toddlers watch too much TV it encourages them to be sedentary, and if they learn to prefer effortless leisure activities at a very young age, they likely won’t think much of non-leisure ones, like school, when they’re older.”

“This study tells us that overindulgent lifestyle habits begin in early childhood and seem to persist throughout the life course,” Pagani noted. “An effortless existence creates health risks. For our society that means a bigger health care burden associated with obesity and lack of cardiovascular fitness.”

The researchers also measured their results against revised screen time guidelines by the American Academy of Pediatrics, which reduced the amount of daily viewing from two hours a day to one a day for children between ages two and five.

Compared to children who viewed less than one hour a day at age two, those who viewed between one and four a day later reported (at age 13) having less healthy dietary habits, skipping breakfast on weekdays, having a higher BMI, engaging in more intense screen time, and being less engaged as students.

“Because we had a lot of information on each child and family we were able to eliminate other psychological and socio-demographic factors that could have explained the results, which is a really ideal situation,” said Simonato.

“We even removed any influence of screen time habits at age 13 to really isolate long-term associations with toddler viewing.”

Dr. Rick Nauert has over 25 years experience in clinical, administrative and academic healthcare. He is currently an associate professor for Rocky Mountain University of Health Professionals doctoral program in health promotion and wellness. Dr. Nauert began his career as a clinical physical therapist and served as a regional manager for a publicly traded multidisciplinary rehabilitation agency for 12 years. He has masters degrees in health-fitness management and healthcare administration and a doctoral degree from The University of Texas at Austin focused on health care informatics, health administration, health education and health policy. His research efforts included the area of telehealth with a specialty in disease management.