A cutting edge technique pinpoints how our brains react to fear appeals in marketing.

Several years ago, the Centers for Disease Control and Prevention launched a national advertising campaign highlighting the grisly dangers of smoking. “Tips From Former Smokers” featured stark, disturbing imagery of real former smokers and the toll that tobacco addiction has taken on their bodies. Some had amputated fingers; others revealed a gaping hole in their throat.

The campaign successfully reduced the number of smokers. But while such fear appeals can be effective for public health, environmental awareness, or political campaigns, the method comes with both risks and limitations.

For one, overly strong fear appeals in advertising sometimes backfire, causing viewers to mentally and emotionally withdraw from the message—a phenomenon known as the “boomerang effect.” Moreover, some of the biggest risks humans face, like climate change, are very abstract in nature—and try as we might, it is hard to get people to engage at all.

But what if there was a way to avoid the boomerang effect and also persuade your audience to engage with an abstract fear?

“Most of our brain is hidden from us. … Normally, we have no access to whatever is happening under the hood.” 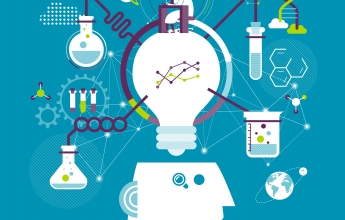 New research from the Kellogg School uses a cutting-edge neuroscience technique to identify the sweet spot where fear-based campaigns have the utmost impact. It finds that people can increase the level of fear they experience while watching a piece of content if they imagine a specific scary aspect of it before they start watching. This in turn increases the likelihood that content, such as an ad’s message, will register, be remembered, and potentially affect future behavior.

“If I show you an ad against drinking and driving, will that really make you do it less? We do not know,” says Moran Cerf, an assistant professor of marketing and neuroscience at the Kellogg School.

“As a start, we decided to investigate your ability to control your own experience of fear,” he says. “We wanted to see if you yourself can identify the things that will help the message influence you the most.”

Previous neuroscience research in the area of fear control has focused extensively on studying people’s ability to reduce negative emotions. Less attention has been paid to the opposite phenomenon, a voluntary increase in negative feelings. This is likely because fear and sadness are generally undesirable and are often intense enough as is.

However, when it comes to persuading the public, increasing fear in viewers has the potential to save lives.

Cerf collaborated with Eric Greenleaf, Tom Meyvis, and Vicki Morwitz at New York University. They recorded, in real time, how frightened a person was—not by asking them but by actually eavesdropping on the inner workings of their brain using electrodes implanted in their heads. The process, called single-neuron recording, tracks the firing activity of brain cells linked to fear.

Single-neuron recording is typically used only in animals. But the technique can be used for human studies in unique situations where the research is conducted during brain surgery for epilepsy treatment.

In such a treatment, physicians surgically remove the area of the brain where seizures originate to cure patients whose epilepsy cannot be successfully treated with medication. To find the correct region on which to operate, neurosurgeons implant thin, hollow electrodes directly into the brain. A set of even thinner wires can be inserted through these electrodes to detect firing from individual neurons. The patients can then participate in research studies while they wait in the hospital for doctors to identify the exact onset source of their seizures.

“Most of our brain is hidden from us. It operates, and we see the output. Normally, we have no access to whatever is happening under the hood,” Cerf says. “Now with single-neuron techniques, we do have access.”

Single-cell recording gathers different data than other techniques like fMRI and EEG that look at brain activity—and is particularly ideal for studying feelings, says Cerf.

“What we can see when we are using single-neuron recording is how emotions are coded in the brain,” Cerf says. “We can not only see where you feel things like sadness and anger— but can also see them as they dawn on us, sometimes even earlier than your subjective experience occurs.”

In their study, Cerf and his colleagues measured fear responses in neurosurgical patients who had undergone the brain electrodes implantation. The patients watched a number of video clips, including one from Al Gore’s “An Inconvenient Truth,” to test their emotional response. Climate change was deliberately chosen as it is an abstract and distant fear—something humans have difficulty imagining and feeling viscerally scared of.

Each patient watched the clip in two conditions: as they naturally would and again immediately after mentally focusing on the aspects of climate change that frighten them—like seeing loved ones hurt.

While watching the clip as they naturally would, fear-responsive neurons fired at a rate comparable to baseline levels. In other words, the subjects did not feel particularly scared. However, when they imagined specific aspects of climate change that were tailored to their own fears, the firing rate of these same neurons increased.

But critically, not all threats are created equal, and not all can be controlled. The researchers find that this tactic is most useful when addressing fears that are abstract rather than more instinctual or innate.

To demonstrate this, the researchers showed the patients another clip, one that was inherently terrifying—a large spider crawling towards the camera. Right off the bat, this clip elicited a much sharper fear response than the climate change video ever did—the type of response that might be expected to spur a boomerang effect. Asking the patients to imagine something even more frightening about spiders beforehand did not increase their fear.

The results suggest that we can enhance fear response to an otherwise abstract threat by identifying an aspect of the threat that is particularly scary to us. Tailoring the experience around that threat makes the content more likely to be remembered as a threat, potentially allowing for a change in our behavior without enhancing the threat too much—which would cause us to recoil in disgust.

And if enough people are frightened by the same aspects of an abstract threat, it may be possible for marketers or those making public service announcements to tailor the original message accordingly.

“With the help of these patients, we actually learned what techniques and thoughts they triggered to enhance their climate-change fear,” Cerf says. “Now that we have identified the optimal ways to increase fear across individuals, we can calibrate the message to make sure an ad or a speech by Vice President Gore has a stronger effect.”

However, Cerf does not see single-neuron recording becoming a widespread method of measurement for market or consumer research any time soon, as it requires the participation of patients and a hospital’s neurosurgery department. But he thinks organizations and marketers can gain business insights from scientific studies that employ this and other neuroscience methodologies, perhaps by hiring a neuroscientist to interpret the often-impenetrable scientific literature.

“Leaders should read up on the latest discoveries in the popular press on fundamental topics like memory, persuasion, self-control, and emotion regulation—subjects that appeal to both neuroscientists and marketers,” Cerf says.

“The reason I’m at Kellogg is that there is a movement—a trend of neuroscientists who try to bridge this gap between neuroscience and marketing,” he says. “I think that we are in a state right now where neuroscience is answering a lot of the questions that marketing practitioners care about and were unable to fully address quantitatively for years. It was hard because of the difficulty of quantifying our psychology. Now, with the help of neuroscience, we can start looking at ways to break down complex psychological phenomena using tangible, testable metrics.”

Meeri Kim is a freelance science and health writer.